(With loads of issues) first one is a misfire, cars not been serviced in years so I ordered some eBay ignition coils - the issue I've got now is the size... My E39 takes the square base coils - but I've been sent round base coils. The connections are the same but they don't really fit flush. Could I get away with using them?

Joined Mar 23, 2013
·
3,052 Posts
They will probably work (inasmuch as any Ebay option will) provided the length is correct and you get a proper contact with the top of the plug. Unless you are getting codes for "ignition failure cylinder X" though there probably isn't a problem with the coils. I'd be inclined to do the plugs themselves first if you haven't already done them.

Given that its an E39 530i I would suggest you take a look at the CCV. The diaphragm is probably shot by now and it will make a big difference to the overall running of the motor if you replace it. Not the nicest job in the world though. Some bits are restricted access so you kinda need an extra joint in the middle of your forearm to get at things. Worth the effort though as the motor will run a lot more smoothly and you should see a slight improvement in your gas consumption figures. Assuming you are using E5 petrol (if you aren't - try it) even 1 or 2 extra mpg will pay off over time.
R

Ok all good I will stick the battery back in this morning and see if it fires up.

With this CCV you recommend changing, do you have any eBay links u could share so I could give that a crack too while I'm at it

I really don't want to give up on this project my first E39 and I've found a semi decent spec just been neglected for so long. It's in for a deep clean once mechanical side is sorted
R

But revving over 4k gives the EML light.

With MAF unplugged rev how much u want no EML light but lots of smoke.

What do u suggest I check now ..
S

Joined Mar 23, 2013
·
3,052 Posts
You are going to need some sort of diagnostic tool to narrow things down. The "lots of smoke" also hints at potential problems with the crank case vent system. The straight 6s do tend to use oil when they get older so it might be just regular old age causing the smoke when you stamp on the pedal.

This is the thing we're talking about here.

and since you don't mind Ebay bits: 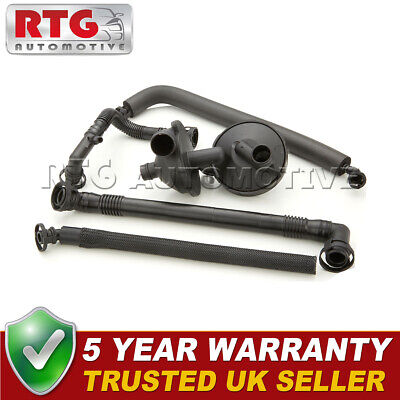 
Probably also worth shelling out £30 for an OBDII cable and software (INPA).

Problems with the MAF can be just dirt in the sensor or it could be a vacuum leak somewhere. The diag tool will probably tell you enough to decide which.
R

Been watching a few videos for this install looks quite intense ,

But will have to give it a go , Ile try ring some local specialists if they can fit it with some cheap labour if not will have to take off my weekend

Joined Mar 23, 2013
·
3,052 Posts
Those misfires might just be gummed up injectors. How long had the car been standing before you got to it? Might also be worth opening up the ebox and splitting re-joining all the connectors in case there is any oxidation. How old is the battery? These things don't take kindly to a weak electrical supply. Check the idle voltage once the thing is running. Should be around 13.5-14V
R

Joined Sep 27, 2010
·
19 Posts
Since the first lockdown, just over a year or so. The battery was dead but I've got a genius Noco battery charger so it's been fully charged. Ile have a look at the ebox ,

It's strange as the EML light only ever comes on with the MAF plugged in, plus I can hear a slight leak of air somewhere kind of like a dumpvalve but not that extreme .

Not sure if I should put all my eggs in one basket with the ccv parts ,

Would faulty ccv throw all those fault codes
S

Joined Mar 23, 2013
·
3,052 Posts
The MAF error is likely to be a seal somewhere. Although the sensors themselves do fail it isn't as common as you might think. Its a 20 year old car so the plastics in the engine bay will be getting brittle by now. I'd be surprised if you got the old piping for the breather system out without it falling to bits in your hand. Same for the valve cover gasket.
J

Joined Sep 27, 2010
·
19 Posts
When you say MAF error is a seal - what kind of seals , I take it the seal error wouldn't be rectified after I've changed the ccv kit

Johnnyroper said:
Is that with the replacement coils on or the originals?
Click to expand...

I put the old coils back on, the new ones didn't sit quite right.
R

rizy247 said:
When you say MAF error is a seal - what kind of seals , I take it the seal error wouldn't be rectified after I've changed the ccv kit


I put the old coils back on, the new ones didn't sit quite right.
Click to expand...

Joined Mar 23, 2013
·
3,052 Posts
The spark plug coils themselves shouldn't trigger a MAF error. If the new coils are sufficiently far off the expected spec for the original you may get problems but that is the nature of aftermarket bits.
BMWs are very picky about anything electronic. If you do decide to replace the MAF use the genuine article if at all possible or go for a pattern OEM. (think its a Bosch item).
R

Joined Sep 27, 2010
·
19 Posts
Well so far on the shopping list
New disa valve, ccv kit , new air filter, wondering what else I should get off the shelves to try sort this vacuum leak. I do have a suction when trying to lift the oil cap with engine on.

'04 330d Sport Auto, '99 523i SE Saloon
Joined Sep 8, 2016
·
742 Posts
Rather than faffing around trying to change the CCV system with the manifold in place (I've tried it and it's a real PITA to get at!) I think your best bet would be to remove the entire intake system including the manifold. Not only will it make replacing the CCV system a whole lot easier but it will also give you the chance to do a very detailed inspection of the entire intake system and identify anything suspect or in need of changing.
Also, I suspect at this point in the car's life you will find some other bits such as the rubber intake boots leading to the throttle, or various vacuum lines coming off the manifold that are brittle/perished/split and in need of replacement - I've learned from experiece with old BMWs that quite often something unexpected breaks whenever you try and remove something else.
Might as well get the cam cover gaskets done at the same time. But be warned, cheap Chinese knock-off items from eBay won't last, so buy something that is at least a recognised brand (if you can't stretch to OEM) unless you want to be having to do the work again in a year's time.
I wouldn't bother changing the MAF sensor until you have eliminated the possibility of any air leaks and made sure the CCV system is health. Also, you can check the operation of the DISA valve to see if it's healthy - may not need replacing, could just do with a new O ring.
R

Joined Sep 27, 2010
·
19 Posts
Appreciate the detailed response, just really cold right now here in London will have to do the work in better conditions.

The car I'm working on is an insurance write off , it's had a slight knock, I've just had a look under it and see this yesterday morning :/
R

Joined Sep 27, 2010
·
19 Posts
Appreciate the detailed response, just really cold right now here in London will have to do the work in better conditions.

The car I'm working on is an insurance write off , it's had a slight knock, I've just had a look under it and see this yesterday morning :/
S

rizy247 said:
Appreciate the detailed response, just really cold right now here in London will have to do the work in better conditions.

The car I'm working on is an insurance write off , it's had a slight knock, I've just had a look under it and see this yesterday morning :/
Click to expand...

If there was an image attached it hasn't come through.
R

Joined Sep 27, 2010
·
19 Posts
Re attached now. Just hoping whatever caused this to pop hasn't caused too much damage